I've been missing from this blog for a while. I had a series of frustrating experiences and some rejections in new things I've tried to do.

It made me think about what I actually like to do and what I'm maybe actually good at. Being a mother to my three children is certainly one of them. But being a mother can be exhausting and sometimes I just didn't want to sit down and blog about it when the day was done.

But what I have liked without fail for the last thirty years (probably more), is books. Specifically children's books. I'm known as a book nerd and am often asked for book recommendations for kids of lots of different ages. So I started a new blog with a focus on children's books, literacy, reading, and writing. It is something I'm always passionate about, always doing, and always want to talk about.

So if you have kids and want them to read. Or if you like reading kids' books. Come and follow me here:

Tesseract Books
Posted by Emilee at 3:02 AM No comments:

Between a very messy exploding homemade playdough incident and the older girls leaving some store bought playdough out and the baby choking on it, a few months ago I declared loudly that we were never doing playdough ever again! And I stuck with it for a while too.

We're coming to the end of summer and Daddy went out of town and we're bored. So I tried something that had always grossed me out a little, but the kids loved it: edible playdough. Rolling stuff around in your hands and then eating it sounded icky to me. But let's be honest, that's how my three-year-old eats most of her food right now anyway, especially bread and muffins. And not only did we not have to worry about the baby picking some up off the floor and eating it, we could give him some to play with.

There are variations on this all over the internet. Microwave 3 large marshmallows and around 2 Tbsp. peanut butter for 10 seconds. Mix them together and slowly add powdered sugar until it forms a dough. (I think I added a little too much and ours turned out a little crumbly, but it still worked.) I tasted it before it got smooshed in kids' hands and it wasn't too bad. I doubled the recipe and it gave both of my girls plenty to play with.

Here's the baby with his playdough. We didn't give him much and he ate most of it. He was pleased to be doing the same activity as his sisters. 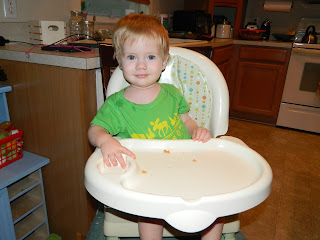 The six-year-old made a dinosaur egg in a nest and a footprint. She also made a turtle, a volcano, and a snowman. 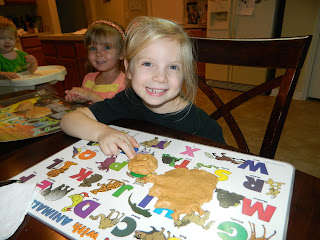 The three-year-old cheeseball spent the whole time making a huge cake. She rolls up little balls and smashes them on top of each other until she has a layered cake. 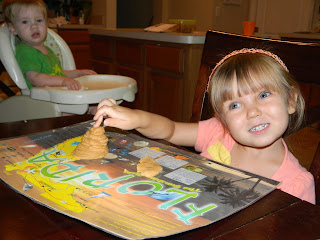 Their hands were greasy at the end, but they had fun and they actually didn't eat that much of it. Plus nothing exploded and no one choked. So I'd call it a success.

We've been doing a couple of other things that have kept us from going too stir crazy inside this summer. We have Wii Zumba games and my girls loves to do it and it gets a lot of energy out. And on the other end of the spectrum, we've been doing Cosmic Kids Yoga videos on YouTube. It's a British lady in full body sweater jumper things and she tells kooky stories with the yoga movements. It gets them moving but also relaxes them.

What are you doing to get through the last days or weeks of summer?
Posted by Emilee at 12:05 PM No comments: 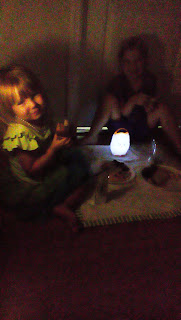 Yesterday I let my girls have a picnic in the dark at the end of the hall. Why did I do that?

a) I'm just a super awesome, cool mom.
b) The baby was asleep in the front room and I didn't want them waking him up.
c) The power went out.

But I got the cool points associated with answer A anyway.
Posted by Emilee at 4:44 AM No comments:

When I was young I read so much, that I often got through more than one book a day. Some nights I even waited till everyone was asleep and took a pillow and blanket and made a bed in the bathtub and read for hours. (I never had my own room so I couldn't just keep a light on in the bedroom.)

One of my favorites was The Boxcar Children. I read all 19 originals and many more in the series that now has 130 books. My favorite was the first one. I liked to imagine that I would be as resourceful and independent as the Alden children if I found myself parentless.

Today I finished reading the original book aloud to my children. They're watching the movie (yes, there's a movie now) on Netflix. When it's done we're going to compare the book to the movie and my six-year-old, who loves opinion writing, is going to write about which version she likes better and why.

My children seem to love the book as much as I did. I found the Alden children more patronizing that anything this time around. (Oh, please can I hem the tablecloth begs Violet. Oh, Benny! the other three children laugh at Benny's antics. He's five, but acts like a toddler. It is oh so wholesome and the children sound like what an adult would like children to be rather than what they actually are.)

But who am I to deprive my kids of a story I loved, and a potential series with enough books to last them 130 days of reading if any of them end up reading as much as I did? 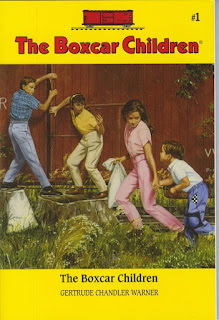 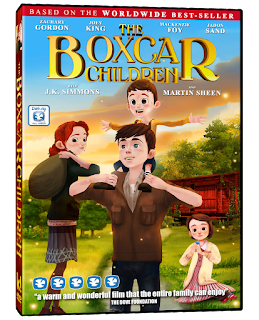 One that stands out in my mind is a young woman who worked at a store in the mall telling me my baby's cry meant she was hungry--she had learned what different baby cries meant on Oprah. What made it really awesome is that I knew what my own child's cry meant without having ever watched Oprah. But for some reason I thought I'd try to finish buying my stuff before I whipped out a boob to feed her.

But really, the best unsolicited parenting advice my husband and I have ever received was last night. While checking out at a store (why does it always happen at the check out counter?), my almost one year old was chewing on the bag of bread. A couple behind us told my husband that the best way to stop kids from biting stuff was to rub the inside of their cheeks with some bourbon.

Yeah...because we're going to go right home and try that one out. I could not make stuff like that up if I tried. People telling me that my baby is hungry makes me want to punch them. But advice that involves putting alcohol in a baby's mouth is so ridiculous that I actually can laugh at it.

What's the best unsolicited parenting advice you've ever received?
Posted by Emilee at 6:13 AM No comments:

My Facebook newsfeed was recently drenched with pictures of your dog and words of your worry because of her scary surgery. She got spayed.

I acknowledge that each person's worries and fears and problems are real for them. But it is hard to care much when between pictures of your dog is a picture of a three-year-old boy I know who is fighting a rare childhood cancer. He has climbed up a sculpture and is about to jump down into his dad's arms. He is getting a chance to play before he is hooked up to IVs again; before another blood transfusion that will hopefully bring his white blood cell count up high enough for him to undergo another surgery to remove another tumor.

Admittedly, that picture puts my own worries into perspective as well. But forgive me if I say a prayer for that boy instead of your dog.
Posted by Emilee at 1:05 PM No comments:

Our summer break starts next week! With my first child exiting Kindergarten, we can all really use the break. The two little ones and I can use a break from the car line and the oldest is excited to spend more time with family. The month of June is going to be really exciting with a visit from an aunt and two cousins and then later from Grandma and Grandpa.

As always, I've made a list of fun things to do. But this summer we need to make a conscious effort to keep up with reading, writing, and math for our soon to be first grader. I'm new at that--any suggestions?

Here's my list of summer fun for our family:

It's All Big Stuff

"Listen earnestly to anything your children want to tell you, no matter what. If you don't listen eagerly to the little stuff when they are little, they won't tell you the big stuff when they are big, because to them it has always been big stuff." - Catherine M. Wallace

“The most beautiful people we have known are those who have known defeat, known suffering, known struggle, known loss, and have found their way out of the depths. These persons have an appreciation, a sensitivity, and an understanding of life that fills them with compassion, gentleness, and a deep loving concern. Beautiful people do not just happen.” - Elizabeth Kubler Ross

Emilee
Before I could read, I pretended to read. As soon as I learned, I read everything I could get my hands on, sometimes reading three chapter books a day. My love for children's and young adult literature continued into my adult years. I worked in a middle school library, taught high school English, read all the Newbery winning books, got a degree in English Literature, and regularly read to my three children.